The 31st December 2017 saw the end of my BPE competition quest as I have received confirmation today (Thanks Alison & Andy Fryer) that I have been awarded the FBPE Distinction.

The final awards/points were gained at the Bebington Salon – the IRONY of which, won’t be lost on those who know me well LOL. !!!

So my refections on my competition journey?

I have really enjoyed (for the most part) the roller coster ride of gaining awards/points in the various BPE comps and salons. I have been elated when a picture has done well and scratched my head when the same picture has bombed. It’s taken a while because I don’t do many prints, I don’t do nature and until just lately hardly any mono images.

Over the last 9 years I have been very fortunate to meet some exceptionally lovely people who are now some of my closest friends and without being involved with photography our paths would probably never have crossed These people have been and continue to be a joy to be around they have been generous with their time, advice, encouragement and although I am not going to name them/you individually…. you know who you are. Thanks for your friendship and support

On the other side of the coin I have been unfortunate enough to come across some very nasty, vindictive , poison filled individuals. These people suck the life out of those who cross their paths and do everything in their power to “keep people down” and try to stifle peoples progress. It’s impossible to know why these people are the way they are but they continue to blight peoples lives. Obviously I am not going to name them individually …… but you know who you are and thanks for making me even more determined.

So what next? Even though I have enough “points’ for EFIAP/Gold I can’t be bothered filling in the forms etc so I am happy to stay with EFIAP/Bronze but I will continue to support U.K/Irish Competitions. I have no desire to pursue the FRPS distinction so I will continue to be a lapsed ARPS. I would like to help others on their personal quest too and have started putting ideas together on how I can do that.

Personally, I would like to do more judging and would welcome the chance of being one of the judges at a BPE Comp (I feel we need some new faces doing the judging – we seem to see the same people judging over and over again) – so if you are in charge of such a competition I would be happy to chat with you. I have judged a number of International Competitions (the next one is the Southampton International) and have really enjoyed the experience.

So, in conclusion – thanks to all of you nice people out there who have encouraged me over the years … and for those who tried to keep me down, better luck next time 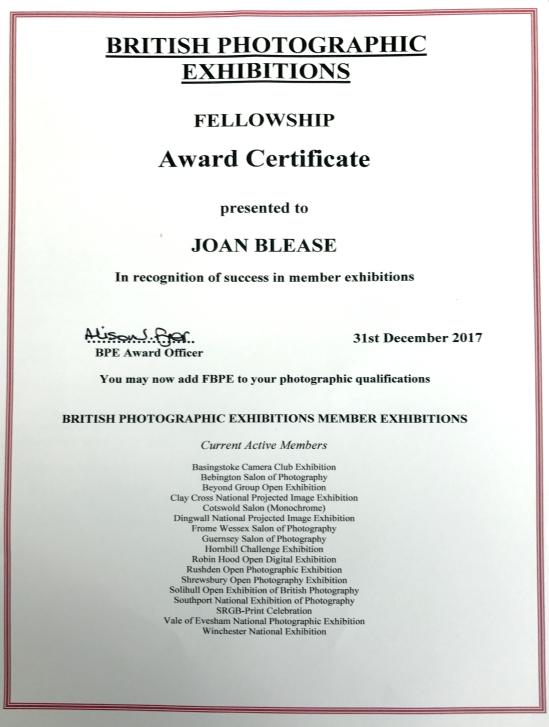 5 responses to “FBPE Award – The End Of A Quest”